there are many words I could use to describe Joseph Ravens, an artist and a human being of many facets. his work, and his work ethics, as well as his joi de vivre, are truly inspiring, a rare combination of committed integrity with heart-felt lightness. his technology-enhanced performances have been shown and toured around the world. his credentials are too extensive and intense to list, to say the least (please visit his site for more information, at the end of this entry). we recently had the opportunity to spend some time together in Chicago; what follows is a series of questions exchange a few weeks after that. in his own words.

your art practice combines elements of performance art, theater and dance, sprinkled with technology. how would you best describe what you do?

This is an interesting question because I often have to describe what I do . Unlike other mediums and disciplines, telling someone you’re a performance artist is usually followed by puzzled looks and a bunch of questions. I have several answers based on my cursory assessment of that person's artistic knowledge. Funny, I’m sometimes wrong and totally talk down to people, describing my work in simplistic terms and then they say, ‘oh, you mean you’re a performance artist, like Abramović or Barney or something…’, and I feel like a fool. Actually, your question uses similar language that I use to describe myself. I love the phrase, ‘sprinkled with technology’ – can I steal that from you? It’s very accurate. Historically, performance art has been difficult to define. Frankly, it’s one of the allures – the limitless unrestrained nature of the medium. I happen to have a theater and dance background so those elements and skill-sets are certainly a part of my performances. But I prefer to identify myself as a visual artist because I apply visual art aesthetics to time-based creations. The structures and narratives present in theater and dance I find problematic and limiting. I really do straddle disciplines and sometimes one artistic genre is better suited as a vehicle for my thoughts or ideas. I present in galleries, theaters, dance spaces, and non-traditional environments.

The semantics surrounding performance art are really interesting – the medium is so enigmatic. Performance (without the ‘art’) is being used the most (I think) in the United States. Live Art is used a lot in England. Art Actions, Art Performance, Behavioral Art…there are so many terms used to define the practice. Performance is becoming very popular again. A lot of sculptors and painters and artists from established mediums are making performances or performance is part of their process. Also galleries and Biennales are encorporating performance. Perhaps one of the reasons Performance is becoming popular again is that Roselee Goldberg (along with Marina Abromović) started the (somewhat elitist) Performa Biennale in New York. As we all know, though, boundaries between artistic disciplines are becoming fewer and far between – and not only in visual art. Hybrid, multimedia, multidisciplinary, transdisciplinary, however you want to put it – the parameters are more elastic now than they have ever been. I’m getting off the topic. In reply to your original question: When my aunt asks me what I do I tell her I’m an actor, director, or playwright. When the average person off the street asks me what I do I say I’m an artist. When an artist asks me what I do I say that my work is a hybrid of visual art, dance, and theater. 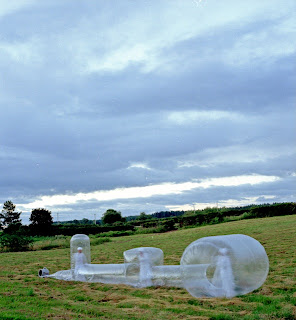 which particular piece of yours would you say exemplifies your practice?

As is the case with most artists, my practice is constantly changing and evolving. I also have a short attention span and an adventurous spirit, so I am constantly interested in fresh approaches or perspectives. I think I’m particularly diverse – sometimes writing plays and other times making dances or fiber-based installations. But I would have to say my performance, RAVENOUS, is most characteristic of my style. I made this piece as my MFA thesis at the School of the Art Institute of Chicago (SAIC). When I moved to Chicago I changed my name to Ravens without really considering the bird or what it represented. The word ‘ravens’ is actually part of my original longer Germanic surname - I shortened it for ease and memorability. When I did start researching the Raven – especially the role of the bird in various mythologies – I found we had a lot in common. So the work came from a really personal place. It also incorporated a lot of ideas and skills that I acquired as a student at SAIC. It was something of a re-birth and it embodied a lot of the aesthetics that I continue to embrace: sculptural movement, large scale fiber-based installation, poetic text, abstract narrative, clean minimalist style, illusion, seduction, and even a ‘sprinkling of technology’. 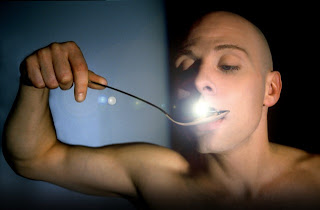 is there one particular sequence or process you employ in your creative endeavors? what are the usual steps between conception and implementation?

Oh gosh. I often joke about starting a company called “Cart-Before-the-Horse Productions”. For the past 10 years or so I’ve felt that my process is backwards. When applying for festivals or grants I manifest ideas – often thoroughly researching and developing the ideas but never implementing them. If and when the opportunity presents itself, I then bring that Idea into being. I have a love/hate relationship to the idea of artist as inventor – a mad scientist toying with his creations in a studio cluttered with materials. I want to be that kind of artist, but it’s really not possible or realistic. I have a general idea and then I usually schedule a fairly short and organized production period – often the month before the exhibition. When I do create a work, though, I really think about it becoming part of a repertoire – a body of work that I can mount and re-mount. I also think about how it travels, since travel is a vital part of my practice. I’m very practical. I think about impact and portability. I think a lot about how I can make something large out of something that is small, lightweight, and easy to carry. That’s what drew me to inflatable objects. When I do create solo works, the video camera is essential to the process. I set up the camera and use the remote to record myself. Then I create or choreograph and view the tape at regular intervals to tweak and shape the work. I hunger for feedback, especially as a solo artist, but it’s a luxury I rarely have the pleasure of. 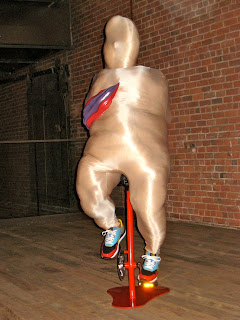 Joseph Ravens in ‘Is My Liver Showing?’ at Midway Studios, Boston, MA

how much, or how little do your life experiences permeate your art practice? if your body is the medium, what message does this body engender?

Sex and seduction, materialism and vanity are ever present concerns for me as a hyper-aware, hyper-sensitive gay man navigating an agist, beauty-obsessed culture. I think by body and the exposure of my body stem from this place. On a more aesthetic level, and in a dancerly sort of way, I simply find beauty in the human form. I’m very interested in anatomical details. In my most recent work, Kattywampus, I choreographed an entire section for my shoulderblades. Whenever I present this piece I try to drop body fat so that my ribs and shoulderblades are more obvious. I really see my body as the material – as the sculpture. I pay a lot of attention to negative space – the air between my limbs, etc. I am very influenced by Butoh – a Japanese artform that embraces a certain physical intensity. My bald head and physical presence is also meant to be something mannequin like, neutral – I like to present myself as something otherworldly – something decidedly ‘other’ while still allowing the viewer access to my internal struggle. In that way, my presence in performance is usually not me as the artist–creator, but, rather, a persona. But this isn’t often the case. I have text-based autobiographical pieces (a lá Holly Houghes) that I rarely perform. I have been focused on working internationally and, in an attempt to create work that is globally universal, my images and ideas have become sort of hyper or meta…less specific or personal. So my life experiences don’t frequently make their way directly into my work and text is seldomly used anymore. I am not interested in any sort of politics or overt message in my work. I aim for something more poetic, lyrical, and abstract. 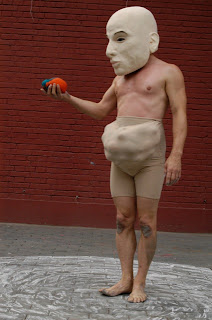 what project are you currently touring? what future projects do you have in the works?

I’m touring 'Security System' and 'Kattywampus'. I often collaborate with Marianne Kim and we are developing two new works – a new inflatable performance installation series that will deal with urban navagation, and the second in a series of ‘rooms’ inspired by the Japanese video game, Katamari. ‘Room One’ was the bedroom and the next room will be the dining room.

I have two personal projects that I haven’t really started but they are rattling around in my skull. I’m very interested in queens – royal women. I’d like to write some monologues or make some videos with transgender male-to-female performers embodying famous queens throughout history. They, of course, would be abstract and idiosyncratic. Perhaps I’m the various queens. I’m curious about keeping it sort of period in style and look but present the videos like a vlog – within an obviously anachronistic technology framework.

I’m also interested in starting a vlog about my inherent ‘wantitis’ - the affliction of always wanting to spend money on something new. An obvious comment on materialism and consumerism, I’m really looking at this habit and how to overcome it – all in front of the public eye. 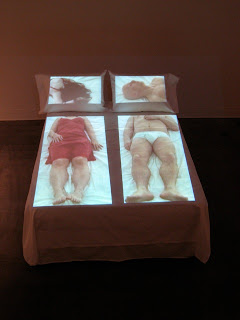 click here to see some recent work
Posted by Unknown at 8:57 AM